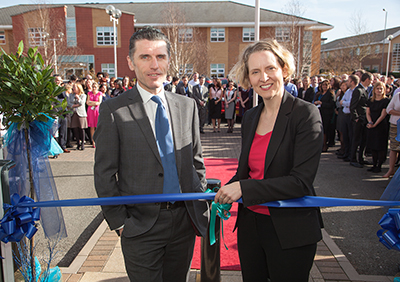 Charter Savings Bank (CSB), the new savings proposition from Charter Court Financial Services Ltd (CCFS), celebrated its official launch with an Open Day held on Friday afternoon. The Open Day marked a celebration for the firm following what has been an already busy year in which CCFS received their banking licence in January.

The celebrations kicked off with an opening speech from Ian Lonergan, Chief Executive Officer of CCFS followed by the inaugural cutting of the ribbon by Emma Reynolds, Shadow Housing Minister, which marked the official opening of CSB.

Alongside Emma Reynolds, many other guests attended the Open Day including representatives from Wolverhampton Rugby Club and CCFS’ chosen charity for 2015 “Believe to Achieve”.

The arrival of CSB is just part of a continuing regional success story for Wolverhampton, which has seen unprecedented development recently. CCFS has been based in the city since 2008 and employs 273 staff; the introduction of CSB will undoubtedly bring new opportunities for recruitment and demonstrates the firm’s commitment to the local area. Jaguar Motors has recently set up offices in the nearby area which received a £6m investment pledge from the Government in 2014.

CCFS has been an avid supporter of the local community and CSB will endeavor to work with local charities throughout 2015. The firm will also continue as proud sponsors of Wolverhampton Rugby Club.

Ian Lonergan, Chief Executive Officer of CCFS, commented, “The Charter Savings Bank open day on Friday was a real celebration for us all at CCFS. The past 12 months has been an exciting time for us all, with a lot of work going into the rigorous Prudential Regulation Authority authorisation process.

“However, the real work begins now and we are all really eager to get going and start serving customers of Charter Savings Bank. We promise to provide competitive rates and excellent, reliable service to our customers. It’s a very exciting prospect and we hope to see further growth and bring even more employment opportunities to the local area.”

Emma Reynolds, Shadow Housing Minister and local MP said: “In the last six months Wolverhampton has enjoyed a real boost to its economy. Many large businesses have moved offices to the surrounding area and it’s becoming a real business hub, rivaling many of the larger midlands cities. Big names such as Jaguar Land Rover have set up in Wolverhampton over the past year, and the launch of Charter Savings Bank signals further signs of economic growth.

“This marks a hugely exciting time for Charter Court Financial Services and all of its employees. I’m excited to see how Charter Savings Bank progresses and look forward to the boost in employment in the local area. The launch is a fantastic achievement for Ian and the team at CCFS and is yet another positive step forward for the region. I wish them the best with all the hard work they have ahead of them.”