I want to be a saver but I'm losing interest

• More than a fifth (21%) of UK adults who have savings are earning 0.50% interest or less on their main savings account

As Charter Savings Bank celebrates passing £1billion in deposits and welcoming over 25,000 new customers since launching in March this year, research from the challenger bank in conjunction with YouGov has found that nearly a third (32%) of UK adults with savings do not know the current interest rate on their main savings account. Furthermore, almost a fifth (17%) admit to never having checked the rate on their primary savings account. In reality, for many savers who opened their accounts over six months ago, any introductory bonus rates will have ended.

In fact, more than a fifth (21%) of UK adults who have savings are earning 0.50% interest or less on their primary savings account - less than the 0.50% base rate set by the Bank of England. With the average UK savings pot totalling £8,500, this equates to an average annual interest of just £43 a year before tax.

It is clear that for the UK, savings has become a habit, but many are simply not engaging with their hard-earned money and earning the returns they should.

How the UK saves

When it comes to how the UK saves, the majority of people put money away for the long term and try to not touch their savings (28%). However, almost a quarter (24%) admit to setting out with this plan in mind but often find themselves regularly dipping into their pot to fund expenses. As we age, the relationship with our money changes. Those aged 18-24 are most likely (36%) to save for the long term without touching their money, followed by those aged 35 – 44 years old (29%). Savers aged 25 – 34 are more likely to save for something specific, use the money and start again, perhaps an indication of the money pressures this age group face (25%). 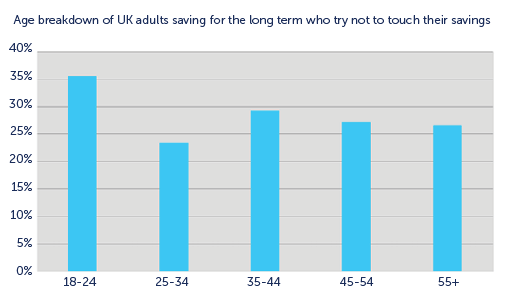 Paul Whitlock, Director of Savings at Charter Savings Bank, said: “High street banks are offering little more to UK savers than a secure location for their savings. With returns from high street banks so low, it’s no surprise UK savers have themselves literally lost interest in their savings. People are simply not aware of how much harder their money could be working for them."

"Despite this, it is encouraging that saving has become a habit for so many of us. But we urge savers to be more engaged with their returns and become savvier with savings. It is not just about saving more, it is about saving smarter. With challenger banks dominating the best buy tables and paying interest rates that can top 2%, some savers could be earning more than four times as much interest as they currently do. Savers should take a look at the best rates on the market and think carefully about how their money can work hardest for them."